The 12×12 LongMill is a smaller build envelope so it doesn’t require an X-axis reinforcement bar. Move onto the next step, but keep in mind that the remaining pictures may show another piece of angled aluminum attached to the back of the X-axis rail. Pay no mind to this since the assembly process is otherwise the same.

The 12×30 and 30×30 model LongMills use a second aluminum extrusion as a reinforcement bar to make the primary rail on the X-axis more rigid. These are the two longest and largest aluminum lengths on your machine and can be found in the heaviest long box alongside the other rails. 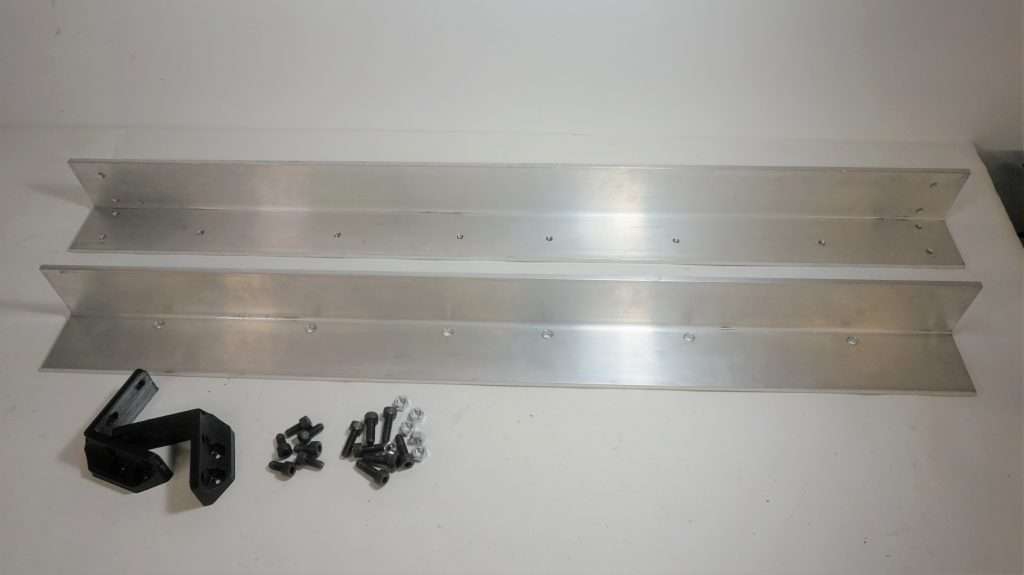 Start by orienting the rails into a ‘lighting bolt’ pattern like in the photo so that the set of six holes on both can be aligned (pictured circled in red).  Also, make sure to check that the small threaded hole on the X-axis rail (pictured circled in green) is oriented as shown so that you’ll be able to attach your drag chain later on.

Grabbing the bag of short, large bolts, you can use six of these to fasten these parts together; the bolts will go through the larger holes on the reinforcement bar and thread into the X-axis rail from the back (pictured). Start by turning each of these short M8 bolts in by hand to get all the holes aligned, then go back and tighten each of them down well with a size 6 Allen key. 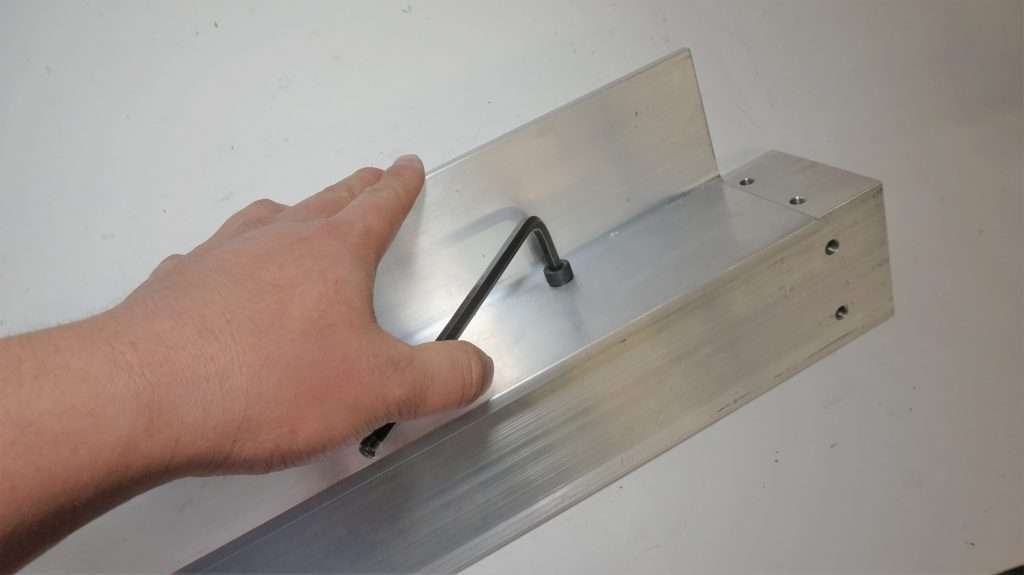 Your completed rail should now look something like this. 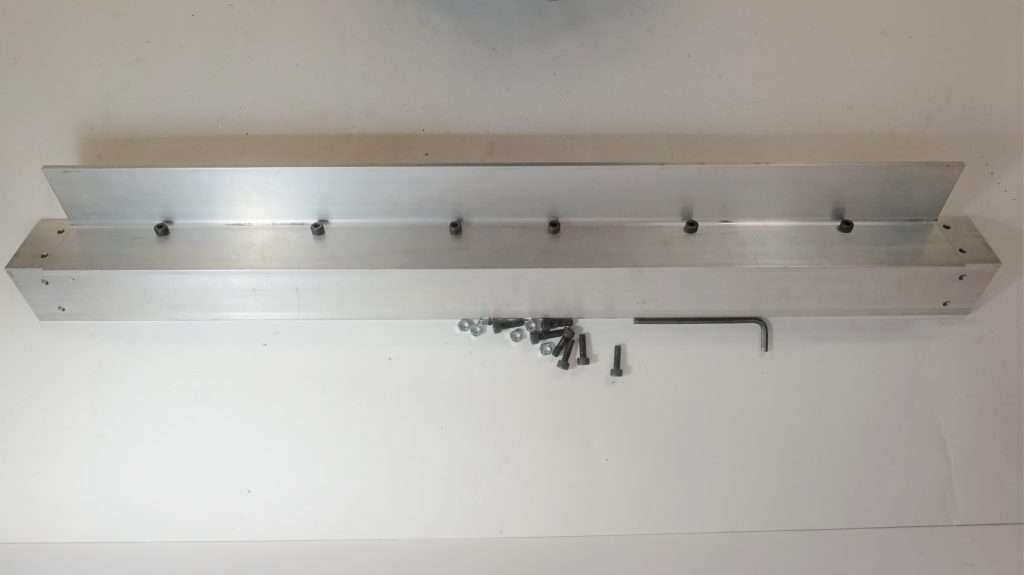 Get the plastic, L-shaped ‘shoulder’ parts from the pile of plastic parts next. These go onto the two ends of the aluminum rail, each fastened with four of the bolts from the bag of short, large bolts. Line each up with the holes first, with the flat part of the bracket facing out (pictured), before turning the bolts on by hand.

Finish securing the M8 bolts with a size 6 Allen key, being sure not to over-tighten them. 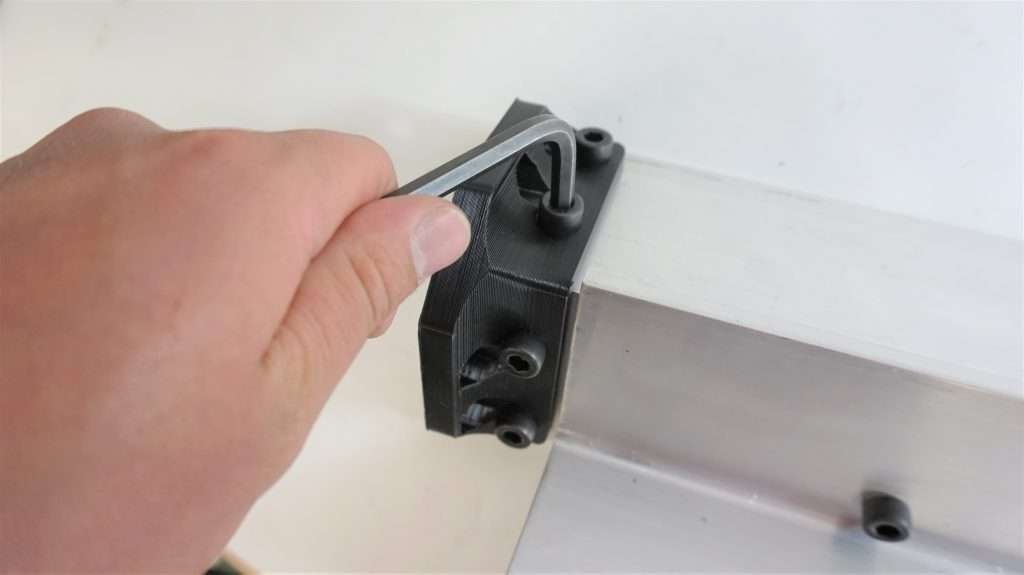 Sandwiching the rail with the Y-gantries

Before we start, you want to make sure that the eccentric nuts on the XZ-gantry are positioned correctly; this can be checked visually. Since the eccentric nuts have an offset hole point, rotating the nut will change the hole position. Looking at the gantry assembly from the front, this pictures shows the top, right eccentric nut at its lowest position. This puts the v-wheel closest to the bottom v-wheel, making the wheel spacing too narrow to install onto the X-axis rail. 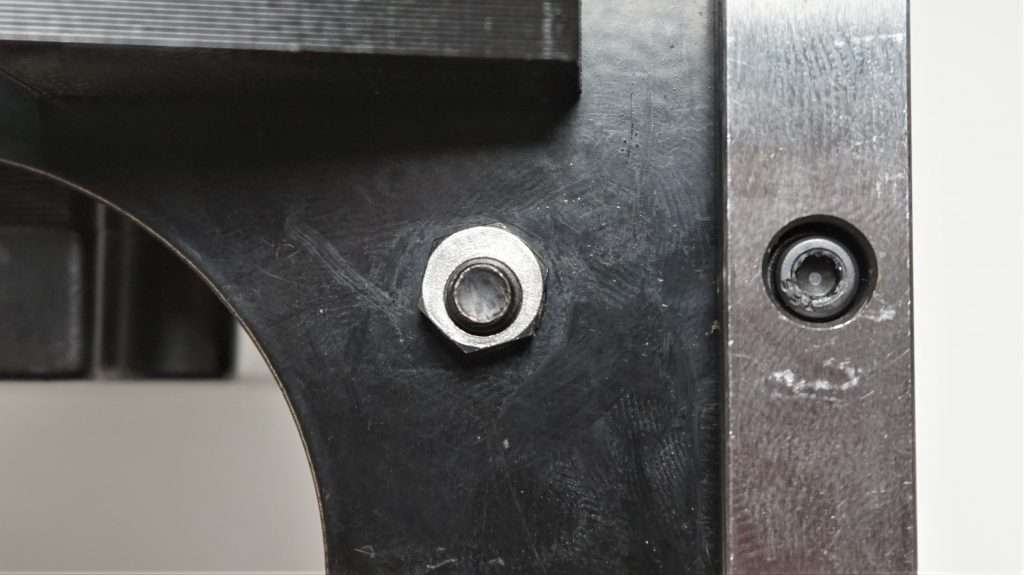 Below, the eccentric nut is in its highest position. This spreads the v-wheels furthest apart, making it easy to slide the gantry on. This is how you want your eccentric nuts to be oriented to proceed with the assembly. This should also demonstrate the concept of how these eccentric nuts can be used to ‘clamp’ the v-wheels onto the aluminum rail in order to have rolling movement along the rail while still being rigid in other directions. 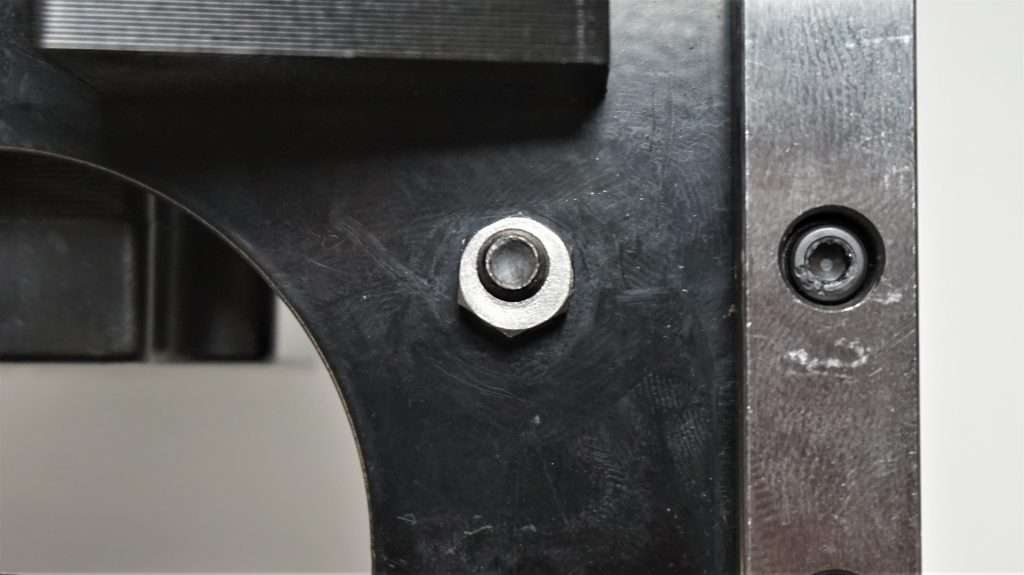 To adjust the eccentric nuts, you’ll have to make sure that the bolts on the v-wheels are still loose, then you’ll be able to use an 8mm wrench or a pair of pliers to rotate the nut into the correct position. Once the eccentric nut is where you want it, re-tighten the bolt with a size 4 Allen key to secure the nut into position. Do this for both nuts.

Lay the X-axis rail down along its length with the inside of the ‘L’ shape facing you and the small, tapped hole oriented to your left. Now take the XZ-axis gantry and slide it onto the rail, being mindful of the plastic ‘arm’ that sticks out the back of the assembly since it’s prone to breaking in this position (pictured).

The v-wheels fit over the aluminum rail as pictured below. Check that they are sitting on the rail in the correct fashion and make sure that they roll along the edge of the rail properly.

Now the eccentric nuts need to be tensioned in order for the v-wheels to properly hold onto the X-axis rail. This process is just like before when you widened the eccentric nuts, except now you want to rotate the nuts so that the v-wheels are brought closer together. Follow the process of loosening the v-wheel bolts with an Allen key, rotating the nut a small amount, re-tightening the bolts, and then checking the looseness of the wheels with your fingers. A properly tensioned system should roll smoothly along the rail but  it should be difficult to use your fingers to turn the wheels by hand while the gantry is stationary.

Next, we’ll be putting the two Y-gantries onto each end of the X-axis rail. The orientation of each Y-gantry will be such that the wheels on the gantry will be facing towards the outside. Let’s start with the right-hand side.

Line up the ‘L’-shaped slot on the steel plate with the rail and tap the plate into place. It works best if you put the slot and the rail head-on so that the slot and the rail line up straight. Note that because of the variance of paint thickness in the slot, you’ll chip some of it out as you mount the plate. These parts are a tight fit so that twisting in the X-axis can be kept to a minimum, so using a mallet and some coercion may be necessary but most importantly take your time. 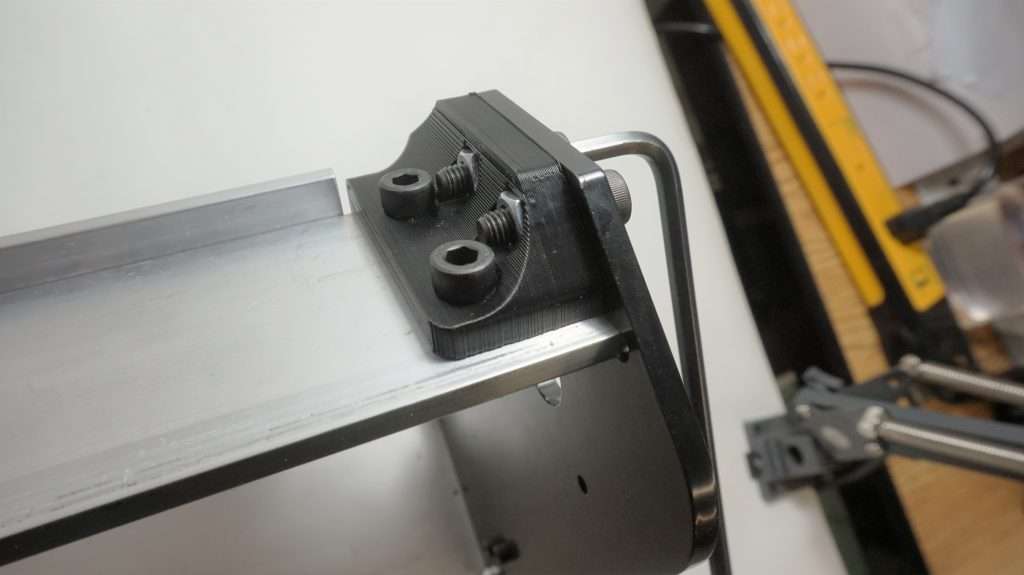 Repeat the same process on the other side, being careful not to cause damage to the motor or the drag chain mount in the process. 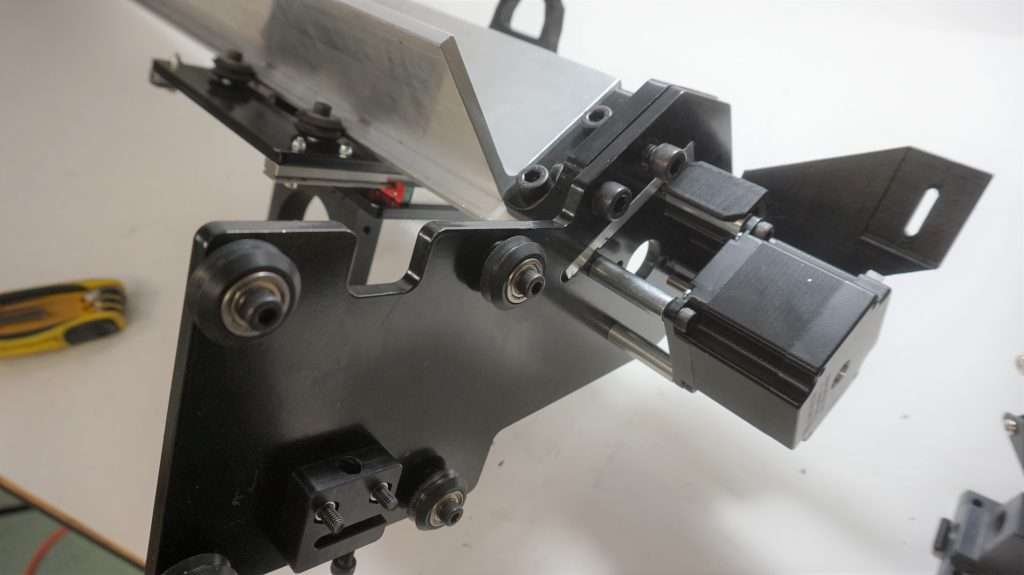 Now that the larger X-axis assembly is done, this is what the completed assembly should look like! 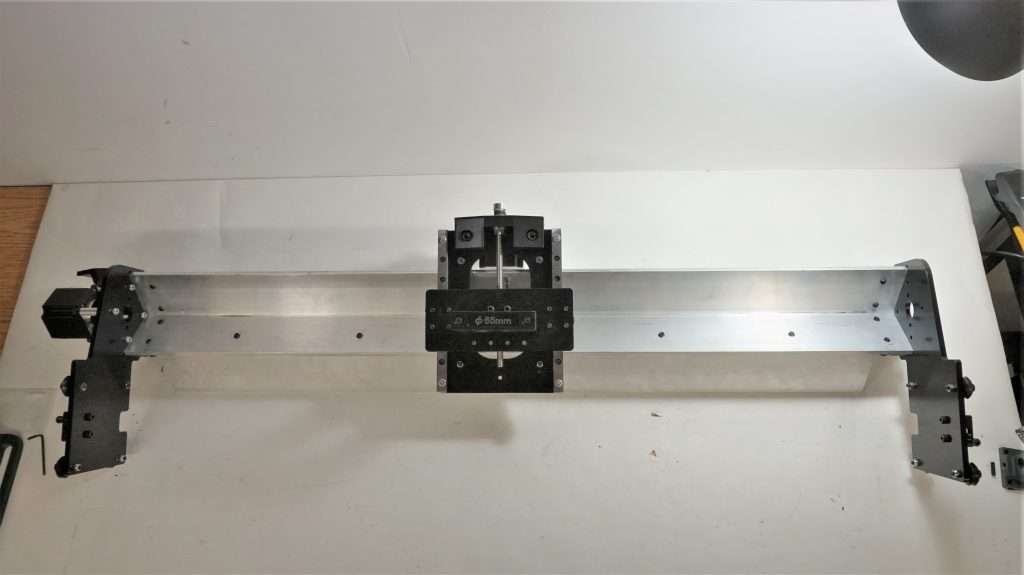 DO NOT stand this assembly up on the v-wheels, it can roll away or become unbalanced which may cause it to fall and become damaged; just leave it laying on its back for the next steps. You can consider propping it up at an angle as well if you don’t want the weight of the assembly pressing down on the plastic ‘arm’ (on V1 machines) on the back of the Z-axis motor mount.

This step will attach the remaining components to the larger X-axis assembly. In the pictures, this step was done at a later time so the X-axis wasn’t laying down on a flat surface, but yours should still be. Since we moved this step to be earlier, pay no mind to the other parts in the picture.

Start by grabbing the lead screws which you set aside much earlier in the assembly. Your LongMill comes with three lead screws, not accounting for the earlier one which was used for the Z-axis. For the 12×12 and 30×30 they’re all the same length and for the 12×30 the longer one is for this X-axis assembly. Get your lead screw and run it through the large hole on the right-side Y-gantry, threading it through the plastic block of the anti-backlash assembly as well.

Loosen the screw securing the coupler on the motor so that you can push it into the 608ZZ flange bearing. Use an Allen key or other tool to push the face of the coupler into the bearing. This will ensure that there is no play left and right in the lead screw.

If your coupler is rubbing against the face of the bearing, M8 washers have been provided to provide some space between the bearing and the coupler.

Now on the other side of the X-axis rail assembly, take a second flange bearing and slide it into place as shown. It should fit into the bore on the right-hand side of the right-side steel plate. 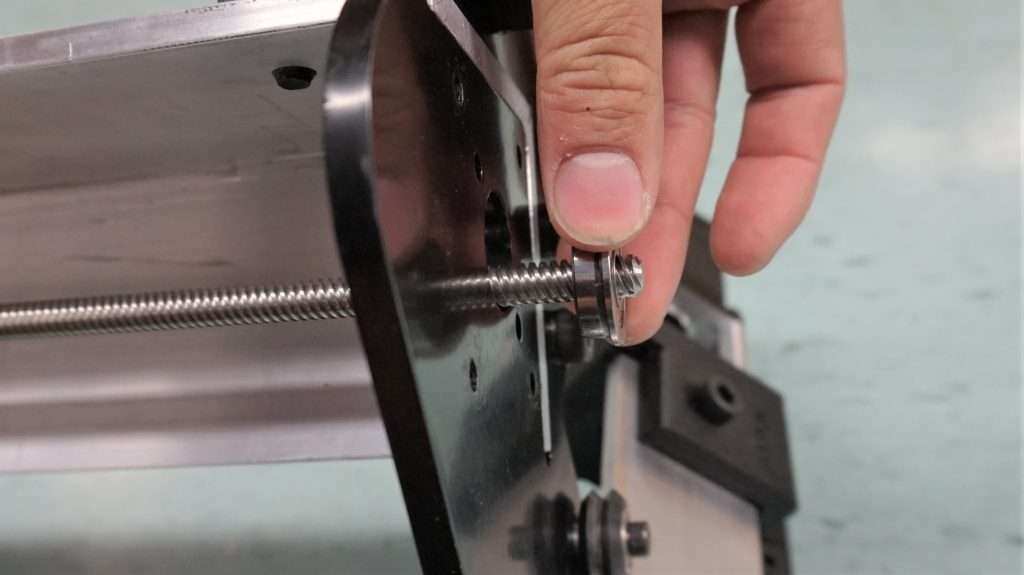 There should still be three ACME locking nut assemblies that you’ve previously assembled. Grab one of these and thread it onto the lead screw from the right, turning it all the way until it’s against the bearing, then tighten the set screw to hold it in place. Make sure the nut is really tightened into place before tightening its set screw. 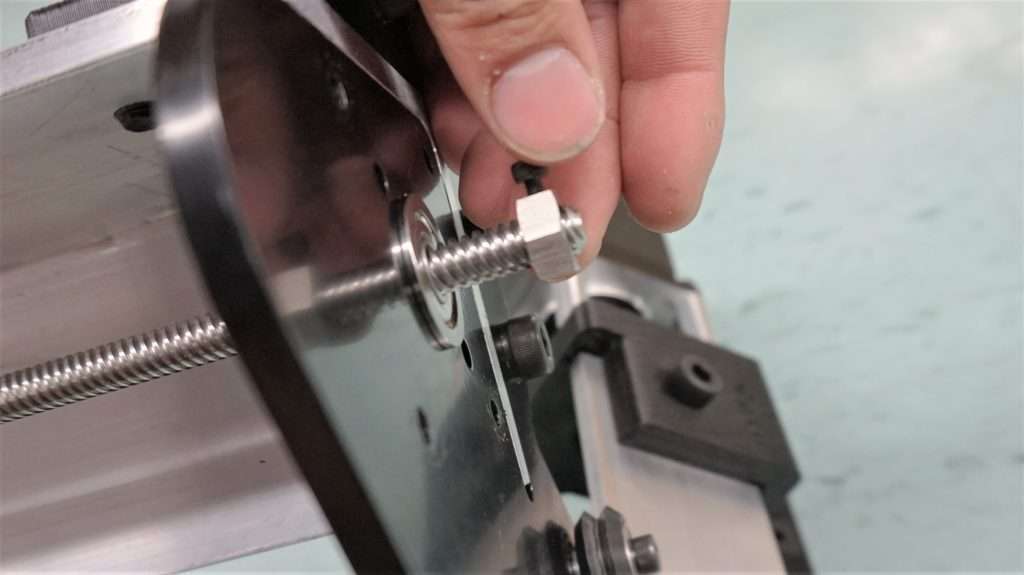