The diagram below shows the machine coordinate system of the LongMill. It’s able to move in its x, y, and z-directions due to the rails and respective gantries it has on each of those axes. We’ll start by assembling the x and z gantries which combine into a singular assembly; in the diagram these are coloured red and blue respectively. 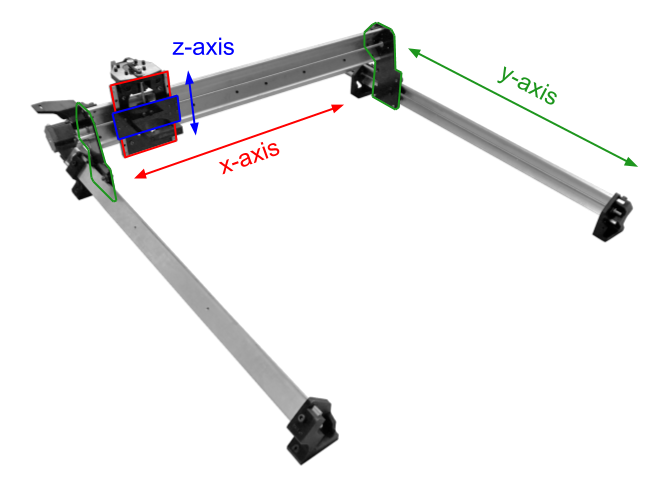 Start by opening up all the large hardware bags and spilling all the contents out onto the table. There should be a bag full of medium-sized, long bolts and another with medium-sized nuts, this is the M5 hardware you need. Another one of the bags will be filled with 4 rectangular plastic blocks, we’ll be preparing these blocks for installing onto the XZ-axis gantry and eventually on the Y-axis as well.

Start by pressing the M5-nylock nuts into the hexagonal cutouts. Make sure that you point the round end of the nut towards you, as you want the first part of the thread to be metal before your bolt gets to the nylon locking part. 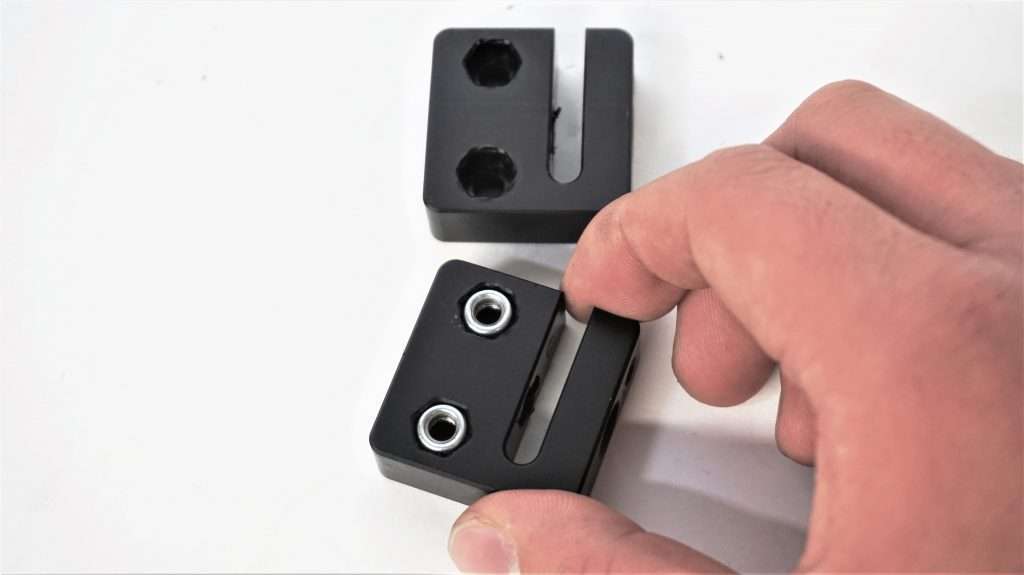 Your kit will come with a set of set-screws and nuts that are used to tension and reduce backlash; however they’re quite short and hard to get to for adjustment when your machine is assembled. For these reasons, we’d recommend that you keep these aside and instead use some of the long M5 bolts. Feel free to install the shorter set-screws in their place once you’ve got your machine running, if you prefer them instead. 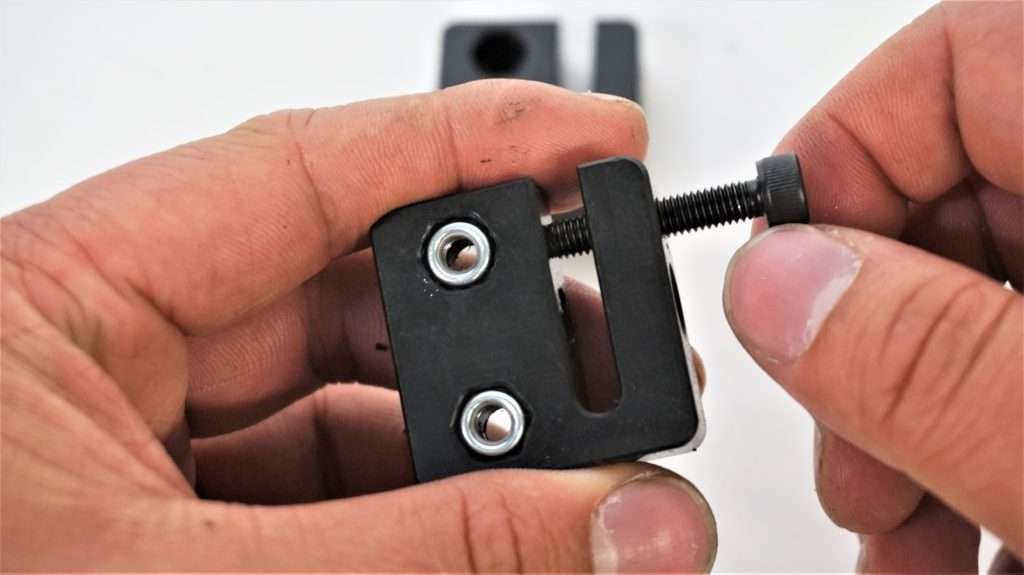 There will be another bag filled with four large nuts, take the contents out and loosely thread all the set screws into the nuts (only do 2.5 turns for now).

Prepare four set of both these assemblies and set them aside for later.

Get the paper-wrapped Z-motor plate, the plastic Z-axis mount, and the bags full of medium-sized bolts and nuts from the last step. You’ll also need the motor specifically labelled for the Z-axis, this one is specially threaded.

Start off by pushing in two M5-nylock nuts into the hexagonal holes in the 3D printed Z-axis mount. These will be used to mount the steel Z-axis motor mount.

To the side, put the steel plate on the top of the motor, ensuring that its white connector is facing away from the middle-sized hole on the plate. Loosely thread four M5-25mm bolts through the slots and the motor, the plate slots may be a little tight but that’s fine; we’ll be adjusting this part and re-tightening the bolts later in the assembly. 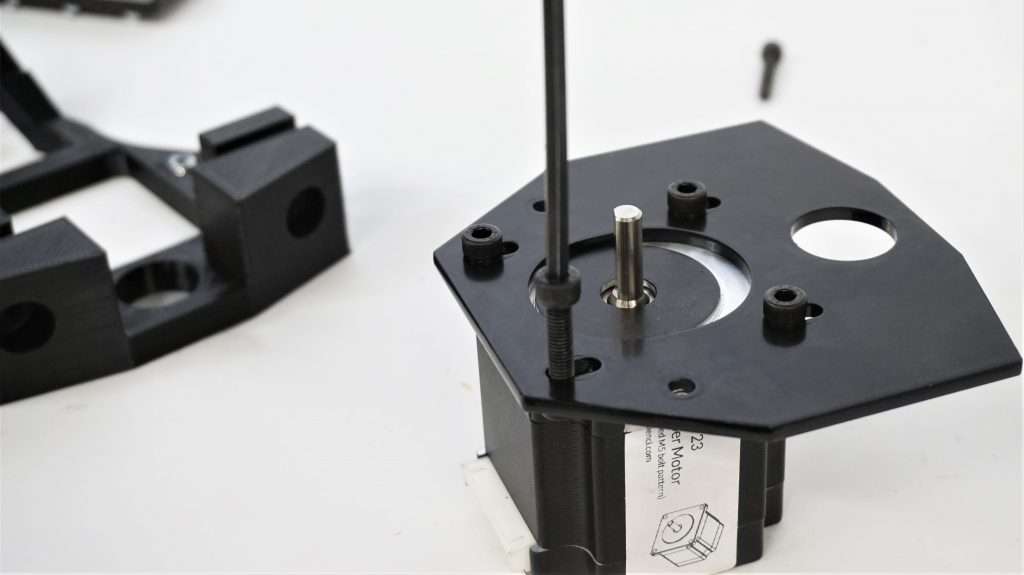 Fit the motor and plate assembly into the 3D printed Z-axis mount. If it doesn’t slide in easily, try sliding the motor all the way forward, and tilting the plate back slightly. You’ll know they’re aligned when their profiles match and they lay flush against each other.

Get the bag with bearings in it and use two when pressing them into the top and bottom bore on your assembly. You should be able to get them on easily with your thumbs. If you find resistance, try adjusting the steel plate so that the bores on the plastic and steel line up.

Using two more of the same bolts, secure the plate and the 3D printed part together. These should thread all the way through to the nuts that you placed earlier in the plastic mount. 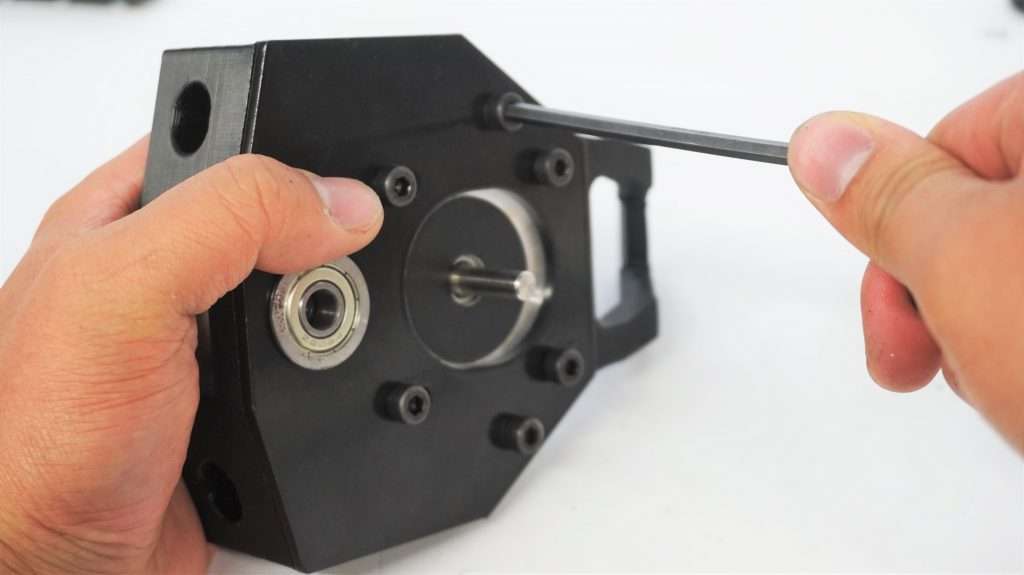 One of the long boxes is lighter than the other, it will contain the drag chains, lead screws, and the motor cables (wrapped in paper). The drag chains and motor cables can be set aside until the end of the assembly. Get the shortest lead screw that’s hiding in the paper wrap on one end, as well as an ACME locking nut assembly from before. Thread the nut about an inch and a half down the length of the lead screw. Make sure the nut still has the M3 screw for later locking it in place. 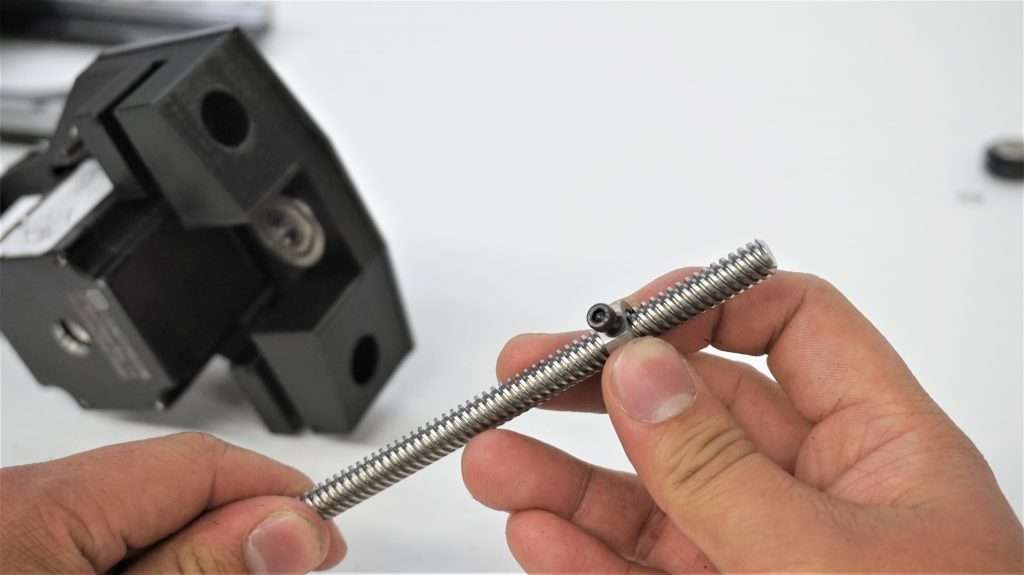 Next, slide the short end of the lead screw up through the flange bearings. It should slide in with little force; if you’re having trouble then try wiggling the lead screw back and forth gently. 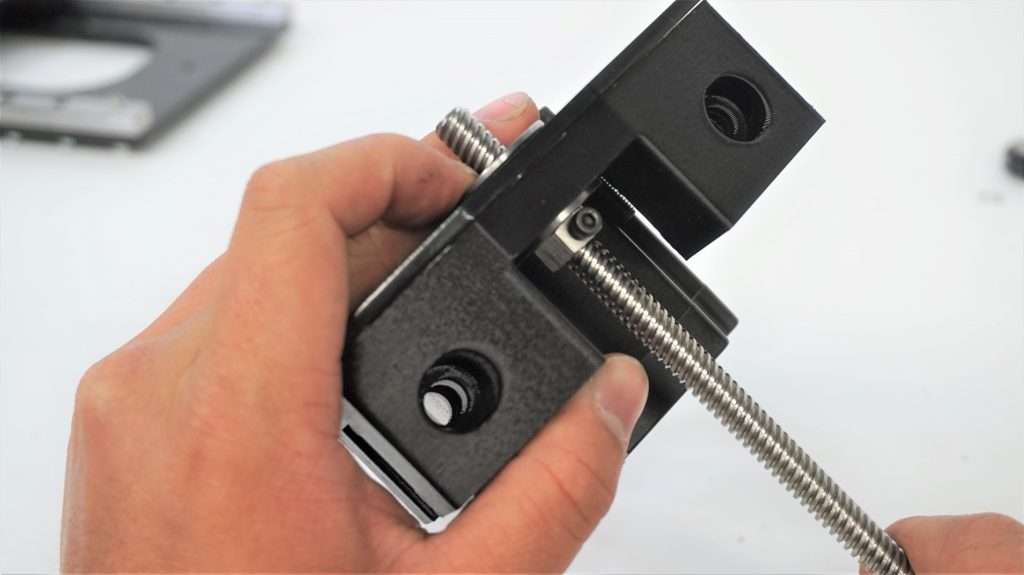 Locate the bag with a belt and two pulleys. You’ll find that only one of the pulleys will be able to fit over the lead screw but you’ll first have to unscrew the set screws a little with the included Allen key. Orient the pulley so that the base is flush with the end of the lead screw then tighten the screws into place.

Once the pulley is secure, twist the ACME locking nut in from the other side so that the pulley and the nut are sandwiching the two bearings. Once in place, tighten the M3 screw on the nut to hold it in place and ensure there’s no play up and down. Adjust and tighten if necessary. 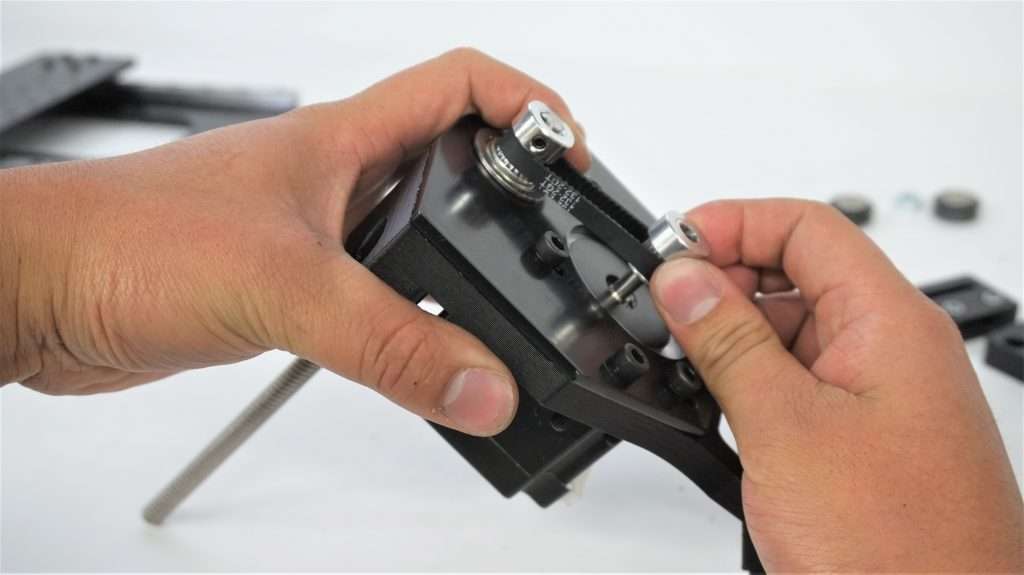 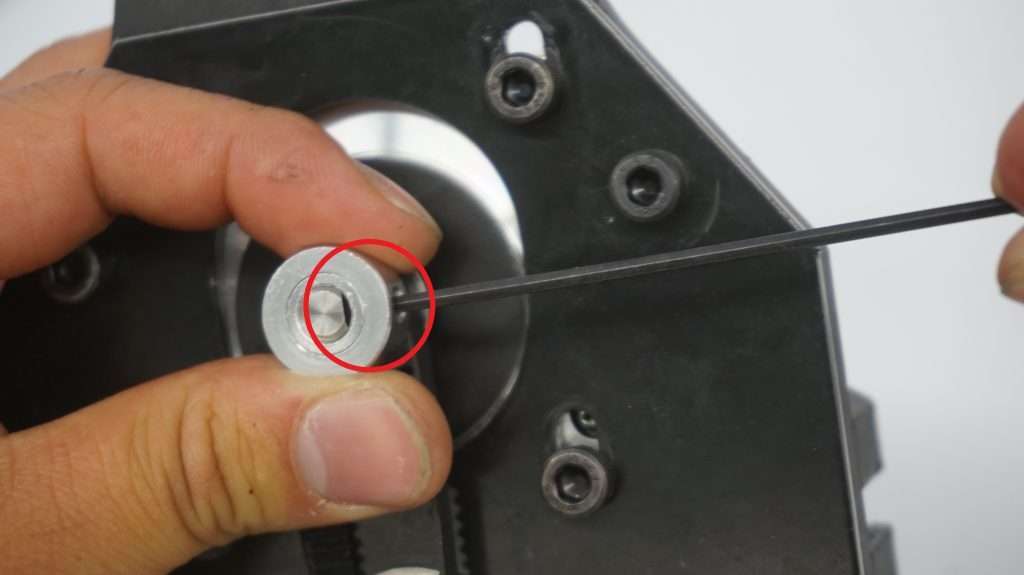 Next, make sure that the belt is tight around the two pulleys by pulling back the motor in the slot then tightening the M5 bolts that are holding it in place.

You should find the XZ-gantry assembly in a labelled bubble mailer. Once you take it out, you’ll see there’s a small steel plate (z-gantry) attached to big steel plate (x-gantry) via two sliding rails. First, check that the movement of your z-gantry is smooth by moving it up and down by hand. There should be no binding and the gantry should move relatively smoothly.

Set the assembly to the side and get the bag full of medium-sized bolts, washers, and the v-profile wheels. Spilling out the wheels, if you look down the center-hole you’ll notice that they have a bronze-coloured inner ring which can sometimes off-center (pictured). Use the included small Allen key from the belt assembly to move the inner ring back into the center. 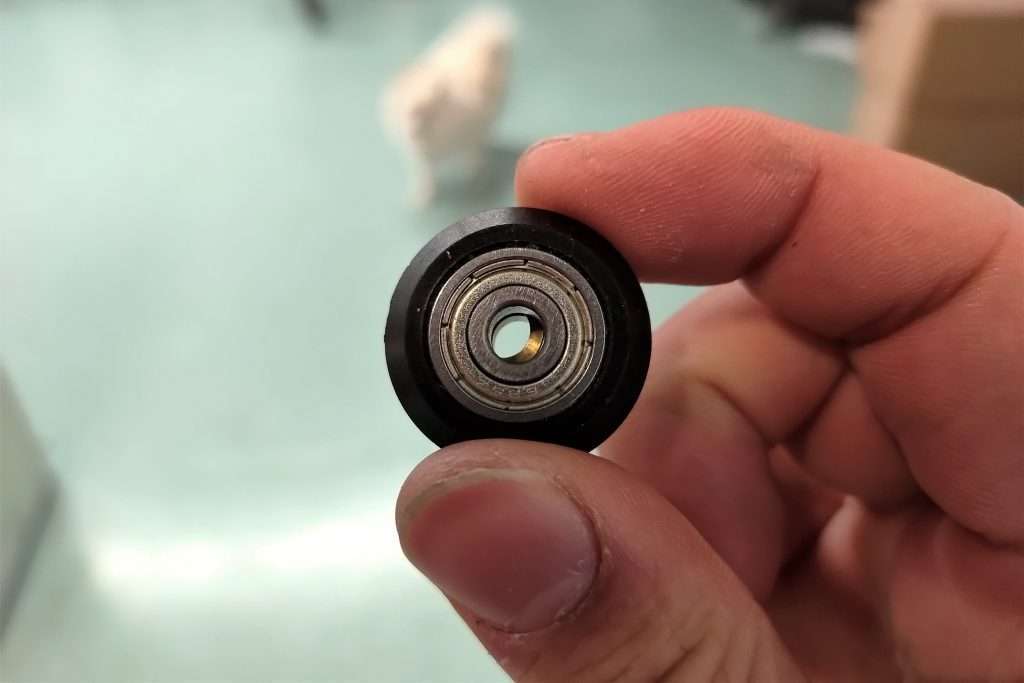 After this, make a small assembly with the wheel going onto the bolt, followed by a washer (pictured). There will be 12 of these sets total. It’s very important that the washer is in the correct place, as it keeps the wheel from rubbing against the gantry, as well as providing the correct spacing between the gantry and the lead screw. 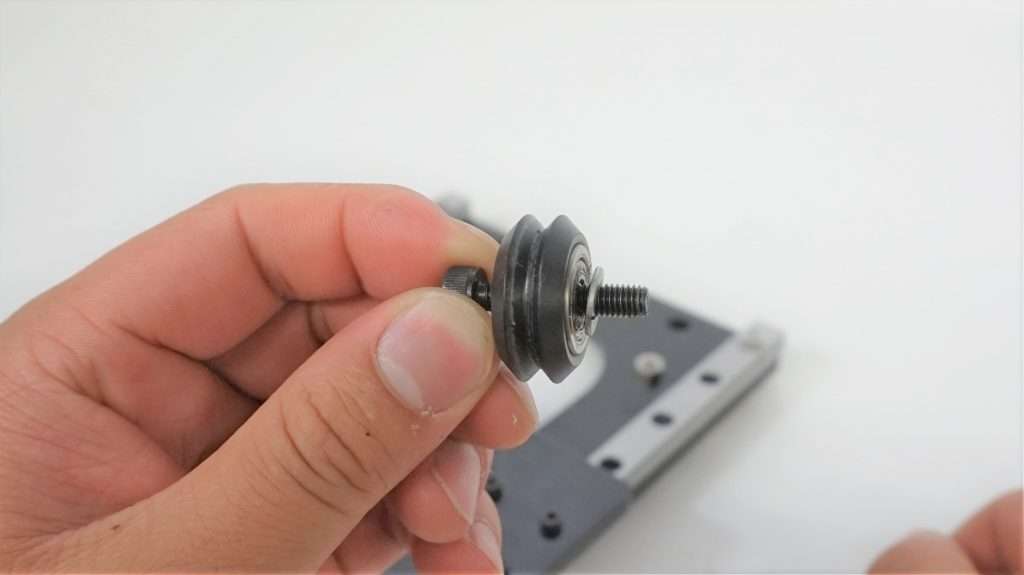 You’ll need four of these assembled sets for now. You’ll also need two of the medium-sized M5 nuts from the last step and you’ll also need to grab the bag of eccentric nuts. These come in a small bag of 6 and are very odd looking so they should be easy to identify.

If you move the z-gantry to the middle on the XZ-gantry assembly, you’ll notice 4 holes in a rectangular formation on the large steel plate. The 4 sets of wheel assemblies go into these holes from behind, the bottom two using a regular nut and the top two using an eccentric nut. Start by fitting the eccentric nuts into the top pair of holes. The round part of the bore should sit inside of the hole, with the hex part facing out.

If you have a hard time getting the nuts in, we recommend tapping them in with the back of a screwdriver or other dull object. This will help clear the excess paint that might still remain in the hole.

Twist two of the v-wheel sets into the eccentric nuts from the other side. These don’t need to be tight yet, so just attach them by hand for now.

Now attach the bottom two v-wheel sets. These attach with regular M5-nylock nuts and need to be tightly fastened into place. You can do this with a size 4 Allen key and an 8mm wrench or pliers.

Once complete, all of your wheels will be facing the backside of your gantry. Check to make sure that each wheel turns smoothly.

There are two anti-backlash assemblies that attach to the XZ-gantry assembly. The first one we will assemble goes on the X-gantry.

Use two M5-25mm bolts (the same ones used to make the v-wheel sets) to mount the nut block. Make sure that the M5 nuts are facing outwards (pictured) so that you can see them. The block shouldn’t be tightened down really hard, just fasten it until it’s snug.

Now we’ll do the same process on the Z-axis on the two holes shown. 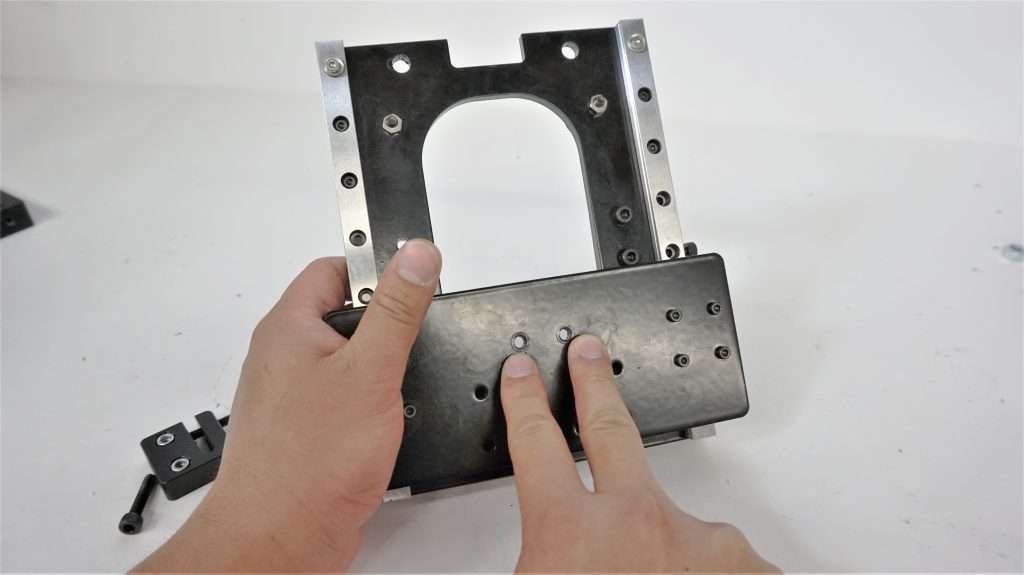 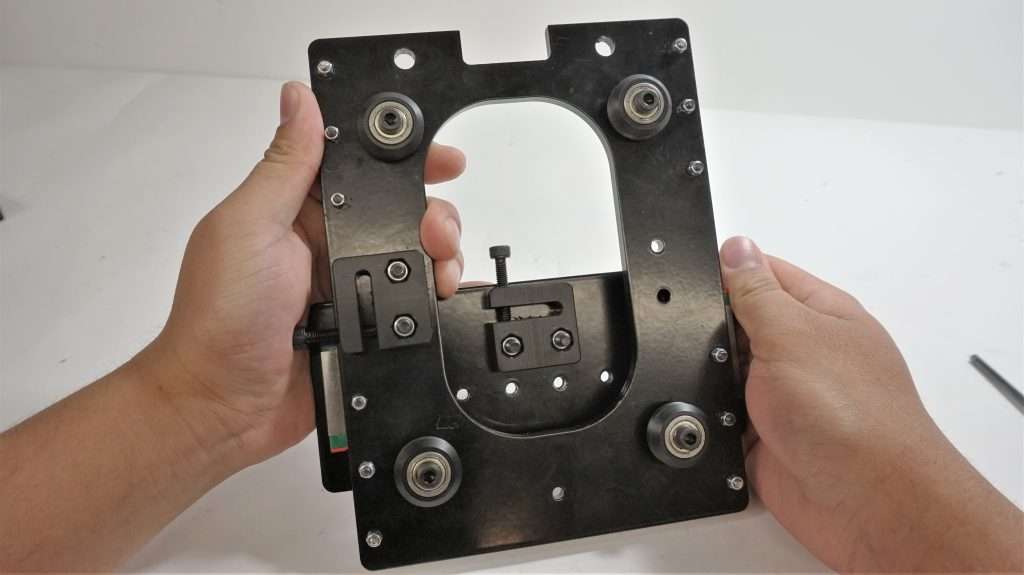 Get the motor sub-assembly from before. Holding it in one hand, and the gantry sub-assembly in the other, line up the lead screw from the motor assembly with the nut block of the gantry assembly. If you use your fingers to turn the lead screw, it will go into the nut. The plastic mount should be coming in from the side of the steel plate which has a rectangular notch cut out.

Continue turning the lead screw until the plastic, Z-axis mount is fully seated into the top of the plate and you can see the holes lining up.

Get the bag of large nuts and the other with the largest and longest bolts; you’ll use a pair of each to fasten these two assemblies together. Take the two large, M8 nuts and push them into the back of the plastic Z-axis mount. If the nut fit is a little tight, then you can use a size 6 Allen key or other tool to press it into place. 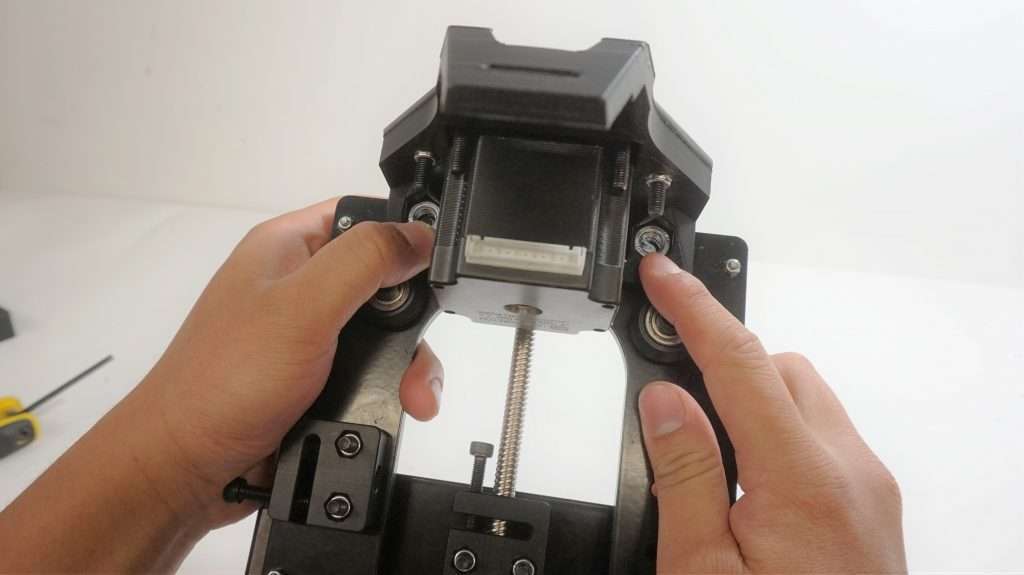 Now with the two long bolts, slide them in from front through the two holes in the plastic mount. Turn them into place with a size 6 Allen key to secure the two assemblies together; the bolts should be reasonably tight.

Notice that the Z-axis gantry plate has two sets of four holes; these are positioned for mounting the aluminum router mount at two different heights. The lower set of holes will allow your router to gain more cutting depth, whereas the upper set will mount the router more rigidly and allow for the full height clearance. Use the upper set of holes to start. 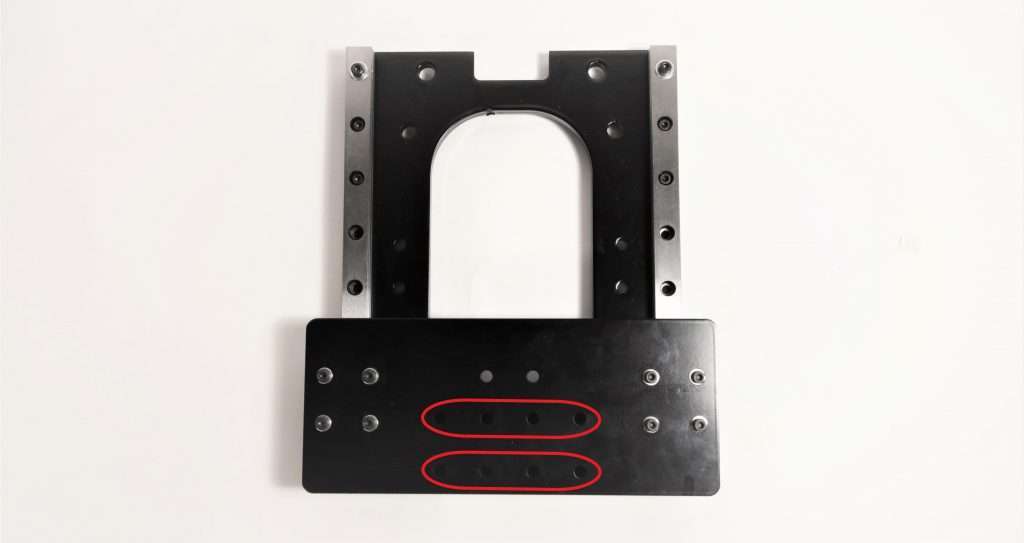 Find your machine’s included aluminum router mount, it will be individually wrapped in paper and labelled appropriately (mount pictured). Also, find the bag with very few, medium-sized bolts which are also short, these will be use to attach the aluminum mount. 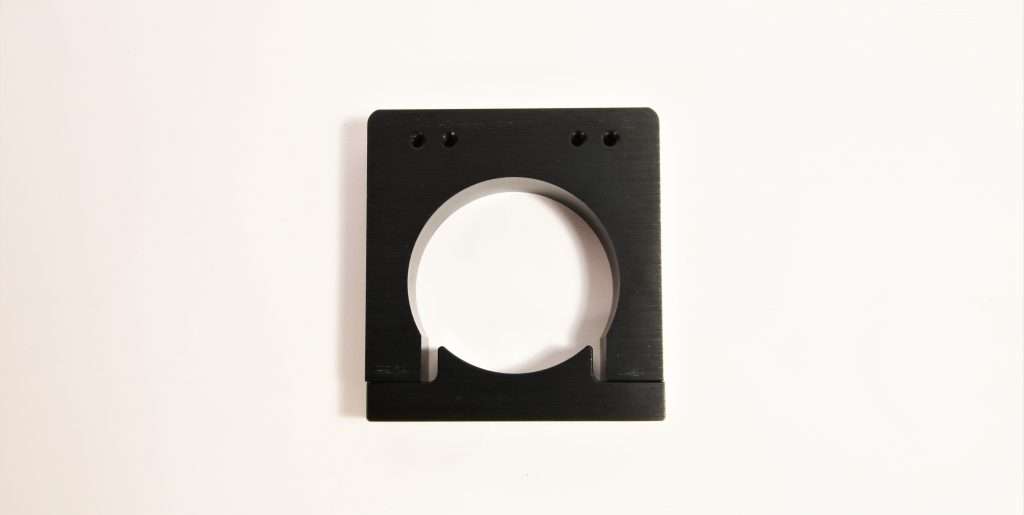 With the current assembly turned around (looking in from behind) you’ll be able to place the four shorter bolts into the upper set of holes. Holding the router mount up to the bolts, you should be able to fasten it into place with a size 4 Allen key.

Your final assembly should look like this. Congrats, you’ve completed the assembly of the XZ-Axis Gantry!